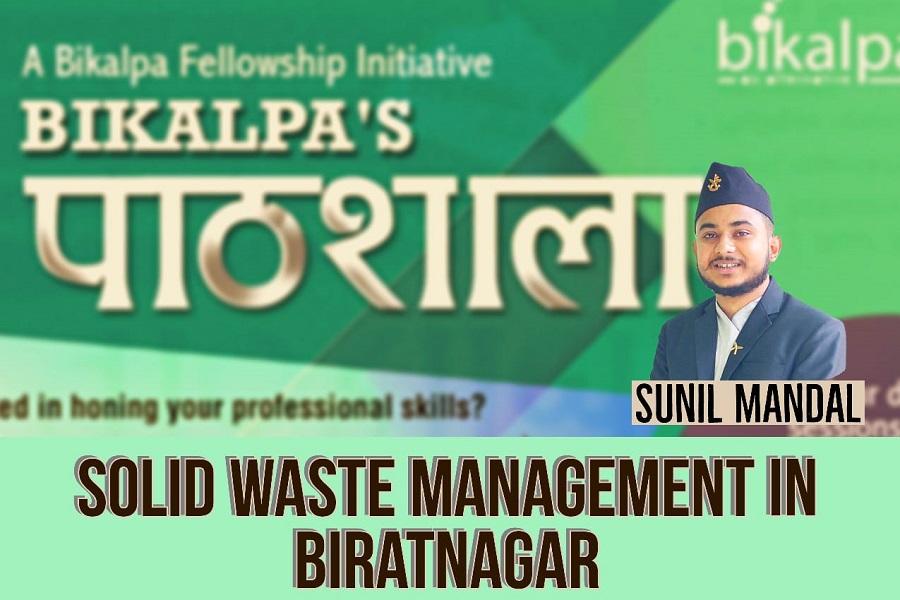 Biratnagar is the capital of Province no.1 and one of the leading cities of Nepal. It has one of the largest border entry point and home to several big industries in the region due to which it is considered as an industrial capital of Nepal. According to the 2011 census the total population of the city is 242,548, and is the largest city in Province no.1 and covers a total area of 77 sq.km (30sq.mi). The city is also the education and healthcare hub of Province no.1 and Province
no.2, and also to the people from neighboring India. Every year, many people migrate into the city due to the availability of facilities like health, education, employment and residence. In the last decade, Biratnagar’s city scape has changed dramatically with many new market centers emerging within the city limits and new residential areas sprawling on the outskirts. Due to this rapidly increasing population, migration and improper housing settlements, the amount of solid
waste produced is also increasing at an alarming rate. However, at the same time the waste management system of the city hasn’t been able to keep up with the rapid expansion of the city. And this has earned the city a dubious distinction of being one of the most polluted cities in Province no. 1 and has regularly faced various problems due to improper management of solid waste.

What is Solid Waste?

Waste is any substance which is discarded after primary use, or is worthless, defective and of no use. The United Nations Statistics Division defined waste as materials that are not prime products (that is, products produced for the market) for which the generator has no further use in terms of his/her own purposes of production, transformation or consumption, and of which he/she wants to dispose. Wastes may be generated during the extraction of raw materials, the
processing of raw materials into intermediate and final products, the consumption of final products, and other human activities. Residuals recycled or reused at the place of generation are excluded. Waste produced in the City and its types Production of waste is increasing due to increase in the urban population and immigration. However, due to lack of any sort of planning to address the increasing amount of waste, its management has become a huge problem. The total amount of solid waste generated per day in Biratnagar is about 66 tons. This waste includes waste generated by settlements like households and institutional sources like schools, colleges, hospitals, banks etc. The amount of waste generated per capita per day is 307 gram, which is significantly lower than the global
average. Out of the total waste produced, 71% is organic waste, 17% is plastic and paper, while 3% include waste generated from clothing and glass items each, and 2% is generated from constructions item, rubber and metal each while the remaining 2% is contributed by other
different types of wastes.

Being a metropolitan city with a bustling marketplace, Biratnagar hasn’t been able to employ a scientific and systematic way of waste management. Apart from the dumping site, even collection points of wastes are not properly demarcated and people litter at various ad hoc locations. Wastes dumped at these places are not collected for weeks, thus causing the wastes to pile up in residential areas and marketplaces. It is not uncommon to see huge piles of wastes
in marketplaces across Nepali cities.

Even the wastes collected by the municipalities are not properly dumped. A prime example of this is the open dumping site on the banks of Keshaliya River, at the west end of the city. The site is close to human settlement and lies adjacent to agricultural lands. On the other hand, the collected waste is not segregated and in most cases, is directly thrown in the dumping site and exterminated by burning. Due to this practice, harmful gases are emitted from it which directly
pollute the air. The site is creating a great problem by deteriorating the fertility of the soil and also affecting the health of the resident in the area. Hence, the improper and unscientific waste management is deteriorating the beauty of the city by making it one of the polluted cities in Province no 1.

Biratnagar metropolitan city really needs to focus on management of solid waste otherwise it is going to face a big problem in future. Collection of waste separately and sending it for recycling process could help to keep the city clean. During late 1990s, the then waste management committee had begun segregation of solid waste based on decomposable and non-decomposable items. However, the practice was discontinued after sometime. As the city expanded wastes produced by industries and commercial areas have not been segregated from local residential wastes. There is a need to categorize wastes into industrial, hazardous, medical, commercial and municipal wastes as each requires different levels of management. The collection rate of the wastage also needs to be taken into consideration. Waste collecting agencies do not frequently collect wastes due to which they are dumped on the roadside. Moreover, for proper sanitation the collection needs to be regularly done on a daily basis or 2-3 times a week in informal locations and areas lying faraway from city centers. Proper regulatory framework needs to be formed to deal with waste management. Practices involving burning trash needs to be discouraged and segregation needs to be practiced at a community level. Training program and involvement of civil and private entities in waste collection has to be encouraged alongside developing information system for a more holistic participation of every possible stakeholders.